Reduce the Risk of a Kitchen Fire 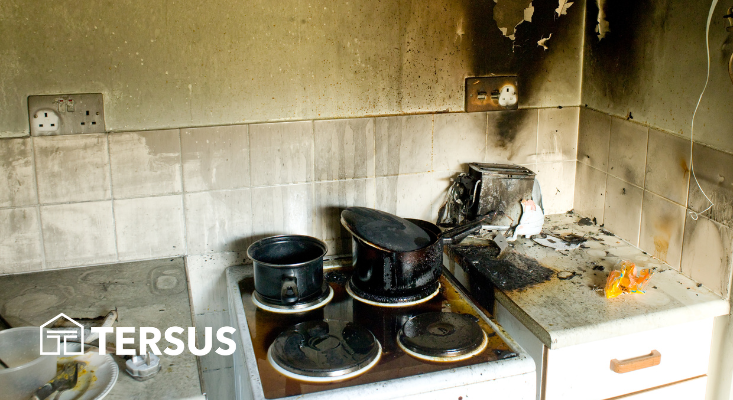 You should be aware of the risks and take steps to reduce the risk of a kitchen fire.

Smoke alarms are a substantial preventative measure for kitchen fires. They will ring out when smoke is detected in the kitchen.

Having a working smoke alarm is vital. Often homeowners have a smoke alarm but haven’t checked it in years. You should test it regularly and replace its batteries at least once a year.

Do Not Leave Heated Food Unattended

It should go without saying that you should not leave food that is cooking unattended, but it is very common.

Some of you reading may be guilty of this at some stage. We know that many things are happening, such as the kids playing, your phone ringing and the TV on. It can all distract you from cooking.

It only takes a few seconds to get distracted; this is where fires can occur. It is recommended that if you plan on cooking, give it your focus. Just like driving, you focus on the road ahead and nothing else.

Keep Flammable Materials Away from Cookers

A popular scenario we have heard is that someone is cooking pasta for their lunch and has left their lunchbox near the stovetop or hob ring, which then melts the plastic. It can happen so quickly if you’re not paying attention.

Taking small actions, such as moving objects away from a flame, is a great way to reduce the risk of a kitchen fire.

Unplug or Turn off Appliances

Unplug all countertop appliances in your kitchen such as toasters, kettles or coffee machines, when they’re not in use.

Such a small step can help reduce the risk of a kitchen fire. The same goes for using kitchen appliances such as cookers, grills or ovens.

Turn off the appliance you are using to cook after you have finished using it. Clean the top of your cooker to clear it of any dirt, crumbs or grease.

Accidents cooking, such as forgetting a pizza in the oven or burning the fry on the cooker. If a fire does start, you can attempt to put it out with the fire extinguisher once it’s not too large.

Another fire safety appliance you should have in the kitchen is a fire blanket. This sheet is used to smother flames and starve them of oxygen before the fire gets out of control.

You should use a fire blanket if cooking oil catches fire. Don’t move the pan; never use water to extinguish the flames. A fire blanket is a solution to stop the oil fire from growing.

Carbon monoxide is a poisonous gas. It is impossible to detect by a human because it has no visible colour, taste or smell.

Increased levels of carbon monoxide carry the risk of a fire explosion in a kitchen. It is essential that you install a hardwired, battery-operated carbon monoxide detector.

If your kitchen has suffered fire damage,  contact Tersus, and we can help restore your kitchen to its former glory.

Chilly night ahead and open fires/stoves will be lit

Emergency services on scene as fire breaks out at family home in Cork city
https://www.corkbeo.ie/news/local-news/emergency-services-scene-fire-breaks-25609896